The legendary Cheese Rolling Championship is a classic British tradition that a lot of people know about but never really give it much thought. However, as we have brought it to light in our email we thought we would give you an insight into the competitive world of cheese chasing! 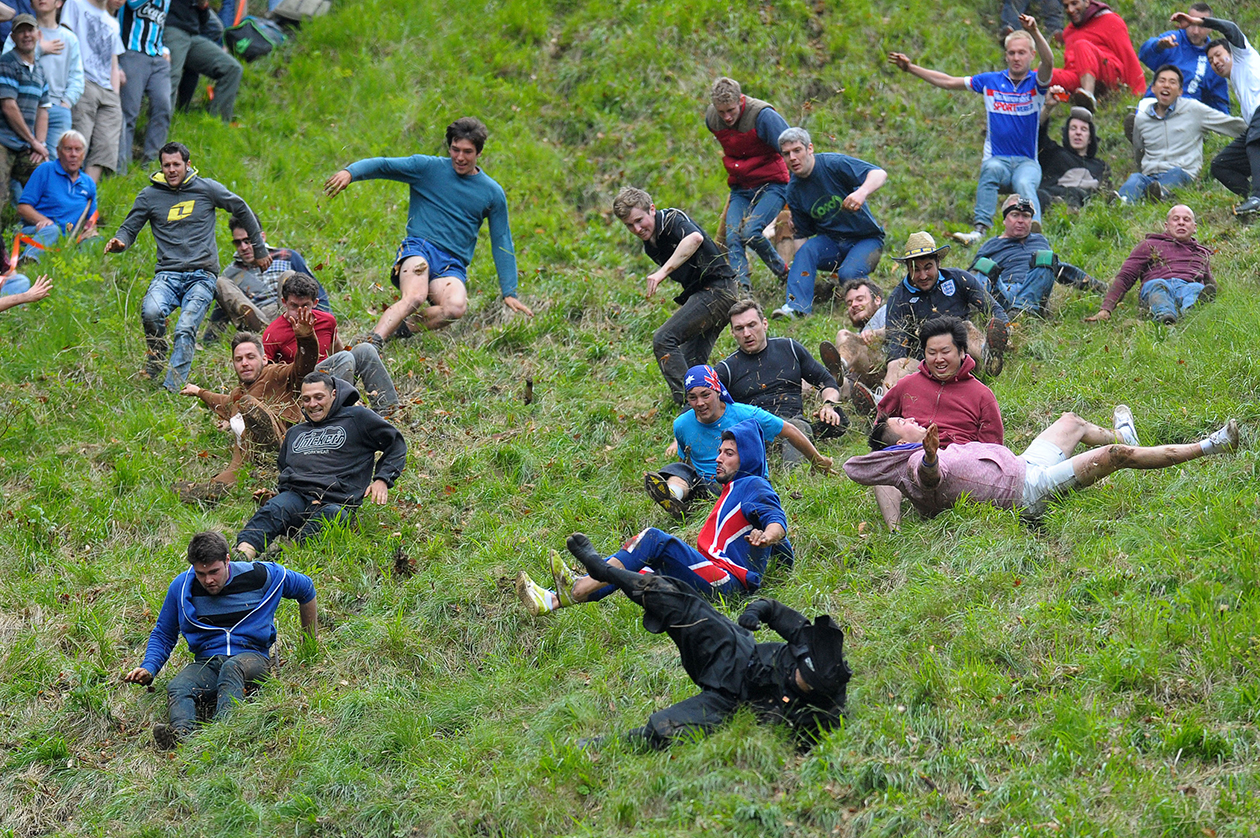 The Cooper's Hill Cheese-Rolling and Wake is an annual event held on the Spring Bank Holiday at Cooper's Hill, near Gloucester in England. It was traditionally held by and for the people who live in the local village of Brockworth, Gloucestershire, but now people from all over the world take part. The Guardian newspaper called it a "world-famous event", with winners from the United States, Australia, New Zealand and Nepal.

From the top of the hill, a 7–9 pounds (3–4 kilograms) round of Double Gloucester cheese is sent rolling down the hill, and competitors then start racing down the hill after it. The first person over the finish line at the bottom of the hill wins the cheese. The competitors are aiming to catch the cheese; however, it has around a one-second head start and can reach speeds up to 70 miles per hour (110 kilometres per hour), enough to knock over and injure a spectator. In the 2013 competition, a foam replica replaced the cheese for reasons of safety. The winner was given the prize of an actual cheese after the competition.

This ceremony originally took place each Whit Monday, before it later transferred to the Spring Bank Holiday. Two possible origins have been proposed for the ceremony. The first is said that it evolved from a requirement for maintaining grazing rights on the common.

The second proposal is pagan origins for the custom of rolling objects down the hill. It is thought that bundles of burning brushwood were rolled down the hill to represent the birth of the New Year after winter. Connected with this belief is the traditional scattering of buns, biscuits and sweets at the top of the hill by the Master of Ceremonies. This is said to be a fertility rite to encourage the fruits of harvest.

The first written evidence of cheese rolling is found from a message written to the Gloucester town crier in 1826, though even then it was apparent the event was an old tradition. Each year, the event becomes more and more popular, with contestants coming from all across the world to compete, or even simply to watch. In 1993, fifteen people were injured, four seriously, chasing cheeses down the one-in-three hill.