St Georges Day - Everything You Need To Know 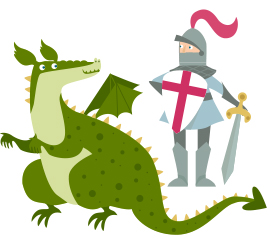 was given to him in 1348 and was typically celebrated by having feasts and jovial affairs with family and friends. Find out what makes St George, St George!

However, after the union with Scotland at the end of the 18th Century, the tradition diminished and since has not been widely acknowledged and is no longer a national holiday.

A church in Fordington, Dorset, records the ‘miracle appearance’, where St George presented himself outside Jerusalem in 1099 and led the Crusaders into battle. The story is etched into stone over the southern door of the church which still stands today. It is the earliest known church in England to be dedicated to the patron Saint. Furthermore, English soldiers wore a sign of St George on their chest and on their backs in the 14th century, as the Saint was regarded as a special protector of the English.

George and the Dragon.

This is probably why St George is so well remembered, not because of his noble crusades, or the militaristic moral he brought to countless soldiers but his heroic deed of saving a Princess called Cleolinda, by slaying a ferocious dragon armed with nothing but his sword and a cross.