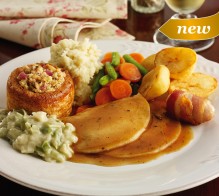 Our rich history has had a great impact on the food we eat - there are recipes dating back hundreds of years that have graced family tables for generations often influenced by visitors from far flung places.

Here’s our pick of the best British dishes and some of the traditions that go with them.

Whether beef or chicken, lamb or succulent pork, the humble Sunday roast is a time-honoured British tradition and thousands of us sit down to a delicious roast dinner each week. This hearty favourite is a wonderful way to bring friends and family together. We’ve some new Luxury Roast Dinners on the menu for this season, complete with all the trimmings - why not give them a try?

This popular winter warmer dates back to the eighteenth century, when potatoes were introduced as an easily affordable crop. Families would use meat left over from a Sunday roast dinner to make a rich sauce, then top it with mashed potatoes.

For an indulgent twist on this traditional recipe, try our Luxury Cottage Pie. It has a rich red wine sauce, covered in a layer of mashed potato with tasty cheese.

Crisp, battered fish and fluffy, golden chips became a popular meal in the Victorian era, when new railways meant fresh fish could be quickly transported to big cities. It became such a staple that, during World War II, it was one of the few foods not to be rationed.

This teatime treat remains as popular as ever, and can be found everywhere from seafronts and takeaways to upmarket restaurants – as well as in the Oakhouse range, of course. Try our Beer Battered Cod for the perfect fish supper.

From Apple Crumble to Rice Pudding spiced with cinnamon, creamy Bread and Butter Pudding to Bakewell Tart, many of our favourite desserts date back hundreds of years. These age-old recipes often bring together British produce, such as sweet apples and ripe cherries, with ingredients from overseas, including sugar and spices.

As well as these country classics, British food has been inspired by the cuisines and ingredients of countries around the world, adopting exotic flavours into the national cuisine, like the always-popular Chicken Tikka Masala.

If that’s whetted your appetite, why not browse our range to explore more of our dishes?