Tikka Masala or Jalfrezi? Korma or Balti? In the UK today, we’re eating more curry than ever before. But when did our love of these spiced, aromatic dishes begin? With National Curry Week in full swing, there’s no better time to find out. 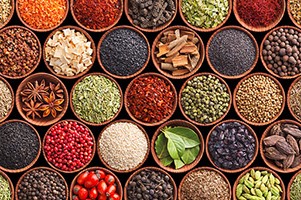 Many of us might think that curry only really became popular in the UK thanks to the growing number of people from India, Pakistan and Bangladesh who settled in cities up and down the country from the 1950s to the 1970s. But curry actually first came to Britain centuries earlier. And since then, there has been a fusion of British and Asian ingredients and recipes that have lead to the creation of some of our best-loved dishes.

A taste of the east

People in Europe got their first taste of spices over 1,000 years ago through trade with the Middle East – but it would be another 700 years before the idea of ‘curry’ started to take off in Britain.

It all started in the early 1600s, when the East India Company set sail to open up trade with East Asia. They established trading posts along the Indian coast that gave them control over large parts of the region – laying the foundations for Britain’s ‘Indian Empire’. As one story goes, they picked up from Portuguese traders the idea of kari – a Tamil word for meat or vegetable dishes cooked with a spicy, fragrant sauce, popular along India’s South East coast.

When the traders returned to Britain, kari became ‘curry’ – and found its way into English cuisine. Some of the earliest English curry recipes come from a book published in 1747: Hannah Glasse’s ‘The Art of Cookery’. But these aromatic stews – using spices such as coriander seeds and peppercorns – were mild in comparison to today’s tastes.

As the UK’s presence in India grew during the 19th century, the British became increasingly fond of curry – not just in India, but back at home. Recipes including chilli, cumin, turmeric and ginger were becoming more popular as wealthier people copied Queen Victoria, who had an Indian chef working at one of her palaces. Classic Anglo-Indian fusion recipes such as Piccalilli and Kedgeree, where spiced rice was mixed with British breakfast favourite smoked kippers, date from this time.

Curry’s popularity dipped during the first half of the 20th century, partly because rationing during the world wars encouraged people to make the most of home-grown ingredients. This all changed with the end of World War II, when Britain started to see more and more people emigrating from Southern Asia – particularly from Bangladesh. Settlers brought the flavours and recipes of their home countries with them, and set up cafés and restaurants to cater for their growing communities.

These early curry houses also began to shape their menus to suit British palates, attracting a wider audience with delicious, affordable food. The mixing of Asian recipes with UK tastes led chefs to create one of our most popular curries: Chicken Tikka Masala. It’s said that in 1971, a diner in a Glasgow curry house asked for some sauce to go with his Chicken Tikka, a traditionally dry dish of spiced chicken roasted in a tandoor oven. The chef improvised a sauce using tomato soup, spices and cream – and a much-loved classic was born.

Chicken Tikka Masala has remained one of Britain’s favourite meals ever since – even becoming a national dish in 2001. It’s also the most popular curry in our range of home delivered ready meals. Other top recipes include our brand new Chicken Tandoori Masala, sweet and mild Chicken Korma, madras spiced Beef Curry and silky Butter Chicken – delicious with hot Naan bread.

Whether you go out to eat at your favourite curry house, or order in our freshly frozen ready meals to enjoy at home, National Curry Week is the perfect time to share a delicious meal with friends and family.

Take a look at our selection of curry recipes from around the world, or order a free brochure to read through in your own time.